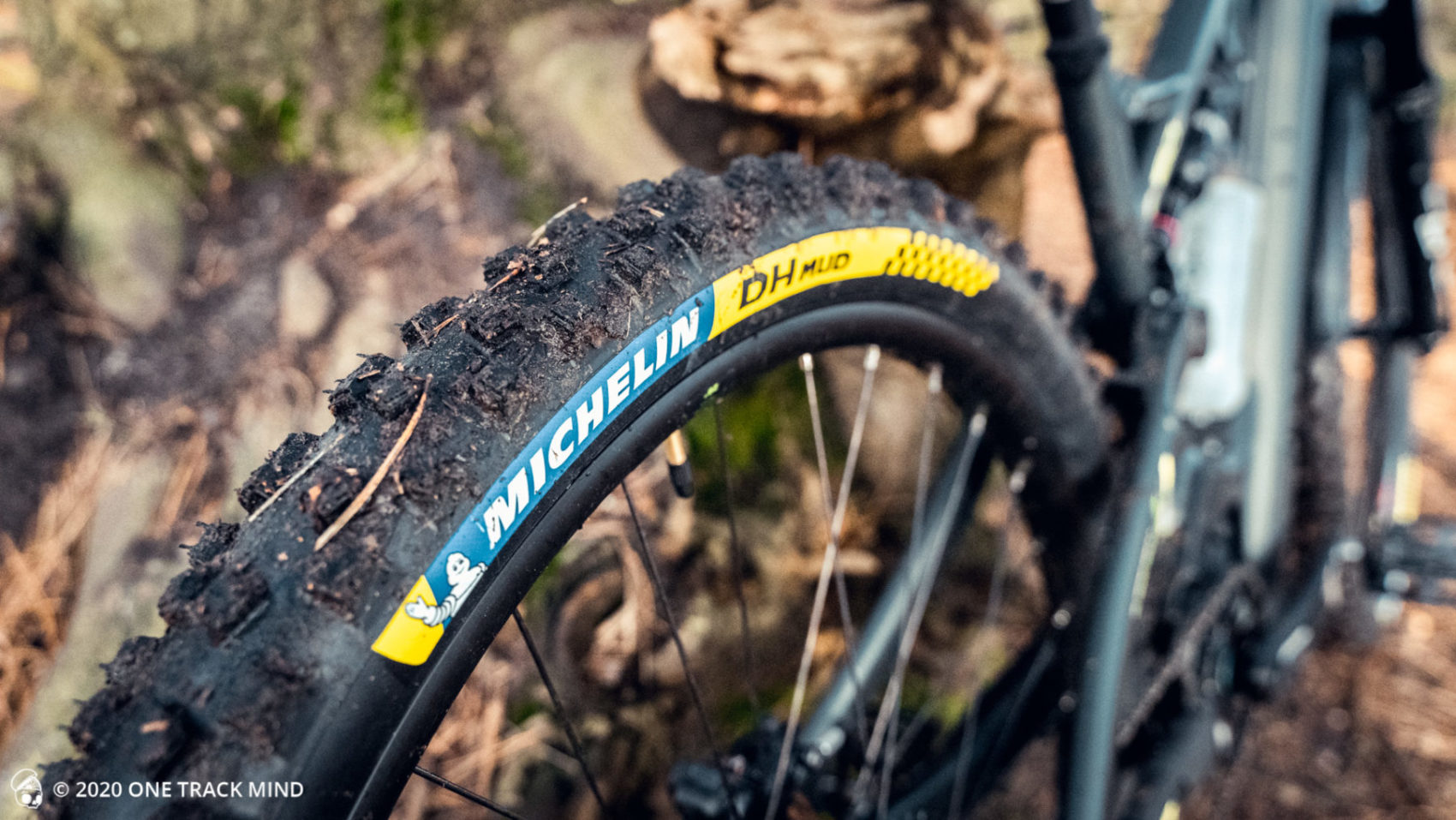 In this review, we are going to take a close look at the Michelin DH Mud tyres. As the name suggests this tyre is aimed at the downhill discipline in muddy conditions. However, in this review, we will be testing these tyres on a Whyte E-150 RS which is certainly not a DH bike but we have done our best to test these tyres on DH tracks. There has certainly been enough mud about recently to test these tyres, how they grip and how they clear mud.

Read on to find out what we think of the tyres and how well the performed.

The DH Mud is a tough, grippy, tubeless-ready tyre designed for the muddiest downhill tracks around. The DH Mud uses an aggressive tread pattern with a tall spike design that provides incredible traction and maximum braking grip in the wettest, steepest conditions. This 2.4-inch wide tyre utilises a Magi-X DH compound, a new generation of top performance rubber providing maximum braking and cornering grip in all conditions and temperatures, even at very high speeds. It’s taken them long enough, but thanks to tyres like the DH Mud, Michelin is back in the gravity game.

As I said at the beginning of the review these tyres have been fitted to an E-MTB rather than a Downhill bike which they are intended for however, they have been tested thoroughly on DH trails and in the muddiest of conditions that the UK has to offer this time of year which believe me is muddy!

The first thing I noticed with these tyres is that boy are they draggy! But that’s not at all surprising looking a the size of the blocks which are spaced out and have not been cut down in my test. These tyres are intended for mud and that is where they excel! the large blocks dig into the pud helping you get traction where other tyres would just spin. The large spaces between the knobs helps clear the mud and the angle of the blocks helps reduce mud build up on the tyres.

The tyres feature a soft compound which is really grippy. I’ve been a fan of the Magi-X compound from testing other Michelin tyres such as the Wild Enduros. The compound grips the trail brilliantly offering a ton of grip but as it is a soft compound the tyres tend to wear quite quickly. I trade off I am more than willing to accept if it means I can ride throughout winter without crashing constantly.

As these tyres are intended for downhill the sidewalls are stronger and the tyre is heavier. You don’t necessarily notice the extra weight when descending but the firmer sidewalls was noticeable when compared to enduro and trail type sidwalls which are softer and contort over obstacles and in corners. The benefit of firmer sidewalls and a stronger casing is that they tyre is less likely to get a puncture and will withstand the abuse thrown at it even on World Cup level DH tracks.

So in summary this tyre is an excellent mud tyre when used as intended and in conditions, it was intended for. Don’t buy this tyre if your rides aren’t gravity-based as the rolling resistance is obvious.

The cuttable blocks grip well in the muddiest of conditions and clear well too. The tyre compound is grippy giving you extra confidence over slippery stuff like roots as well as mud however, they do wear quicker so once the mud has gone switch back to your favourite tyre.

What do you think of the Michelin DH Mud tyres? Have you tried other mud tyres? Let us know your thoughts in the comments section below.

So what do you make of the Michelin DH Mud tyre? Are you ready for winter? Let us know in the comments below.

Here are some other One Track Mind MTB Magazine articles and reviews for you to check out: