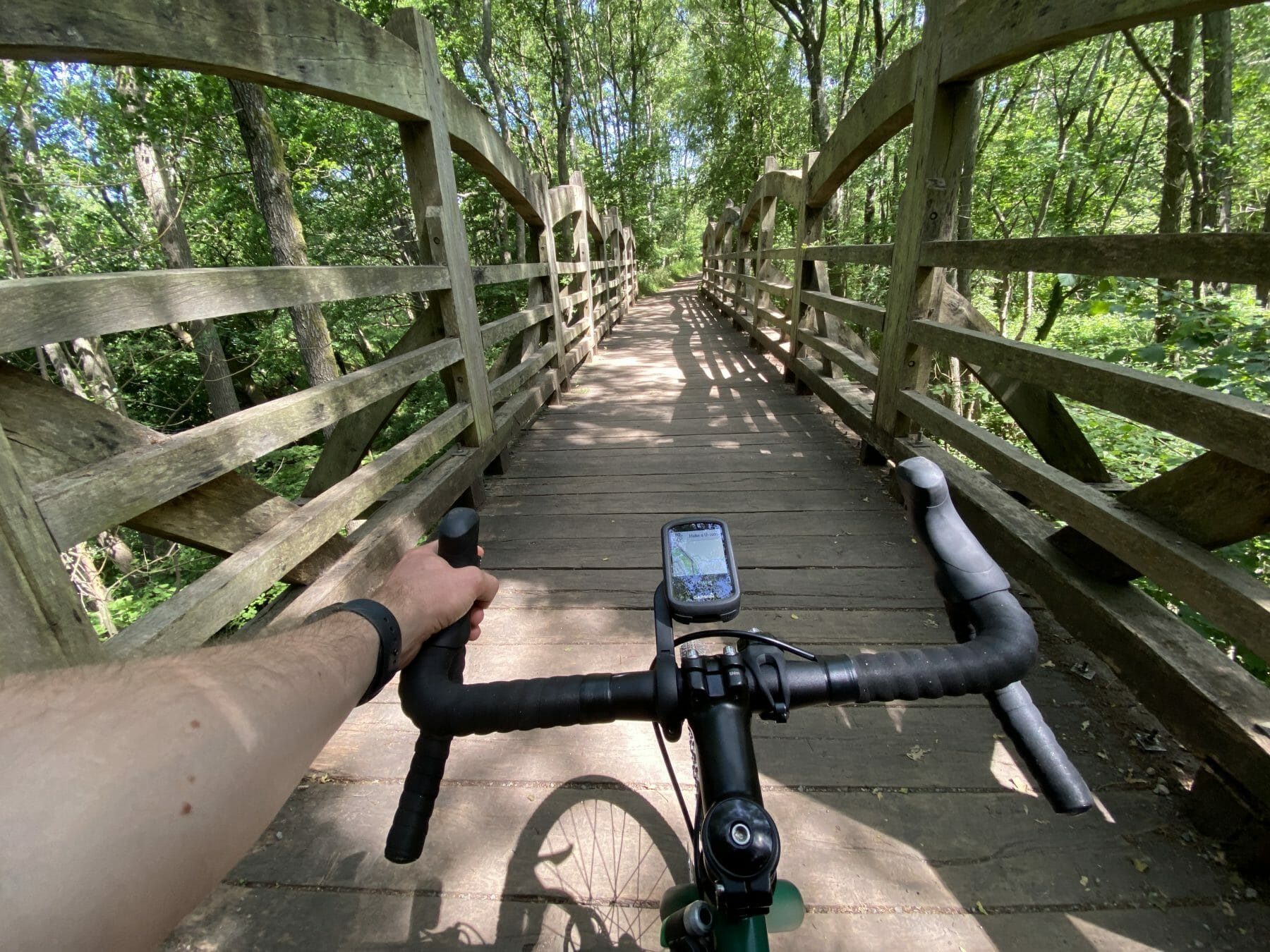 As lockdown was finally starting to lift I decided to give a local off-road cycle route ago that I have been meaning to do for years. The Shipwrights Way is a 50-mile route that starts at Alice Holt Forest in North Hampshire and ends in Portsmouth South Hampshire.

The route is mostly off-road but nothing to rough that a gravel bike couldn’t handle. So I decided this would be a perfect chance to test the new Goodyear Connector Tyres that we had been sent for a product review with Paligap.

To plan the route I initially tried to find GPX files online for my Garmin 530 but quickly realised most available were either only available in sections or the files were intended to follow a walking route rather than cycle. So instead I used a combination of maps and Komoot to build my route. It wasn’t perfect but better than anything I could find.

Let’s just pause a minute to just appreciate how good Komoot is. If you haven’t given it a go you should. The free plan is superb. Anyways let’s continue…

The ride starts at Alice Holt woods in North Hampshire UK. It’s a great place to start as there is a large car park and amenities so you can ensure you are ready to go before setting off.

The ride started off on some stoney footpath/cycle ways and if I’m being honest I wasn’t entirely sure which way to go as the sign pointed in both directions. I took a gamble turning left (facing the visitor centre) and thankfully I guessed right.

After carefully cycling around some people on horseback I was able to start putting the power down. The combination of my steel Vitus Substance frame and Goodyear Connector tyres made for an ideal setup which would absorb the rough terrain and gave me plenty of grip.

Once outside of Alice Holt woods the trails started to get sandy and I mean real sandy. Using my mountain bike line choice skills I was able to keep my cadence and speed up by choosing the trail of least resistance. It also helped that the tyres were narrow and had decent grip so they would cut through the sand.

The Shipwrights Way is mostly offroad but there is some on-road sections you have to tackle. The road is boring and you have to deal with inconsiderate and often dangerous drives but the gravel bike lets you keep your speed up.

About halfway through the journey, I reached the South Downs national park. The trails became more loam.

About the only section, I couldn’t ride was this train line crossing. I’m not sure what was going through the head of the people that designed it as that gutter that’s there to make it easier to push your bike up the stairs was useless so I just resorted to carrying the bike up and over.

Just over halfway I hit Queen Elizebeth Country Park (QECP), which so happens to be my local MTB trails. I changed out my water bottles and stopped for a quick bite to eat before setting off again for the sea.

The trails were thick with about 3 inches of chalk dust from all the forestry vehicles working on the Ash dieback. Myself and the bike got absolutely plastered in dust.

The last stretch of the ride involved a few roads, some sandy tracks and some really nice countryside and seaside scenic views.

It was about midday by this point and the sun was really beating down. I was cooler riding than I was stopped so I ploughed on and made sure I kept my fluids up.

Cycling through Hayling Island was really nice but the roads were very congested. There only seems to be one road in and out of Hayling island and everyone and their dog was out on this day. Which really was surprising seeing as we were still technically in lockdown.

Following my Garmin I came to the end of Hayling Island were sunbathers and jetskis were aplenty. The Garmin showed a straight line from Hayling Island over to Portsmouth. Ideal! I was nearly at the end. My main issue was that I hadn’t done my research beforehand to see if the ferry was running. It wasn’t and therefore I was stuck.

So that was it the ride was over unless I fancied doing a massive detour back out of Hayling Island and around to Portsmouth the long way. As by now, it was 33 degrees Celcius and I was low on water I decided enough was enough and just chilled out on the beach for a bit.

The ride was really enjoyable, and I would love to do it again plus the finish. But I think I will do it with other people next time instead of as a solo mission. Plus the pubs are open again now and there are a few good ones along this route.

Even though this is a longish route there isn’t really anything too challenging and on a gravel bike with the right setup and decent tyres you could easily do it in half a day at a leisurely pace depending on your personal fitness that is.

The Shipwrights Way isn’t going to compete with the likes of Wales or Scotland for views but it’s still a really scenic and enjoyable route. It’s really nice to start inland and finish down by the seaside.

I would certainly recommend using a GPS unit similar to my Garmin 530 as the Shipwrights Way signs can often be easily missed and there are occasionally multiple signs pointing in different directions.

Please feel free to download and use my GPX file at the top of this article. I couldn’t find a good GPX file so had to create my own. It’s not perfect but with a little bit of common sense you will be able to easily complete this ride without getting lost.

Do you have any recommendations on which gravel route I should tackle next? I will be writing about my experience of riding the South Downs way in under 24 hours with Co-Founder Ben last year. That’s just over 100miles and a whole lot of elevation.

What did you think of this article? Let me know in the comments below or start a thread in our forums.