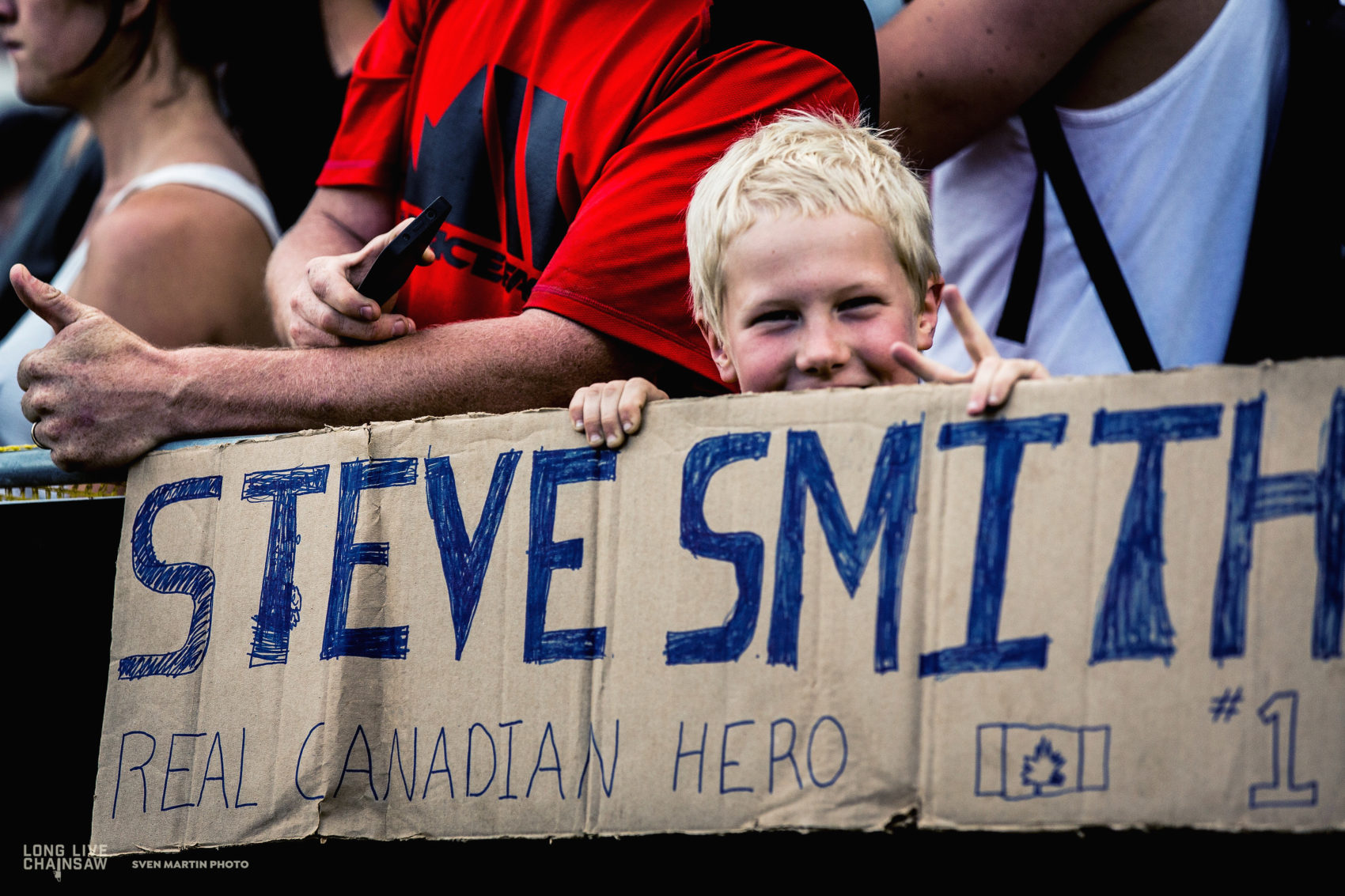 Raised by a devoted single mom in humble surroundings, Stevie’s unwavering belief not only propelled him to become the best in the world but inspired everyone he touched to believe in their own impossible dreams.

A look behind the curtain of downhill World Cup racing, Long Live Chainsaw portrays an underdog overcoming the odds to win the 2013 Overall title. Known as the “F1 of cycling”, downhill had long been dominated by Europeans before ‘The Canadian Chainsaw’ became the unlikeliest of heroes.

Long Live Chainsaw is produced in partnership with the Stevie Smith Legacy Foundation. In 2017, the foundation built a community bike park in Stevie’s hometown of Nanaimo to honour his life and legacy by keeping kids stoked on being outside and riding bikes. All proceeds from the film will be donated to the Stevie Smith Legacy Foundation to help grow Stevie’s legacy of inspiring the next generation of riders.

“When Stevie was suddenly taken from us in 2016, as filmmakers, we were immediately drawn to the idea of honouring Stevie’s life and legacy on screen. Having been so close to him, we knew that some time would have to pass before we’d be emotionally ready to embark on this project.

Stevie’s story belongs to the community as a whole. His life touched so many people that it seems fitting his story be told through the united efforts of the community he helped inspire. This film has been a huge collaboration from those who knew him best—family, friends and fellow riders—to every filmmaker and photographer that ever worked with him.

Our hope for this film is that his extraordinary story continues to inspire future generations of young athletes. Stevie may no longer be with us, but his legacy sends a ripple of positivity out in the universe that will grow with all who come to know his story. Long Live Chainsaw.”

“I was beyond excited when Darcy from Anthill contacted me about the idea to make a film about Steve’s life story. I was at a loss for words….for me, this is the greatest tribute possible! I think that the telling of Steve’s story will be inspiring to a lot of the young riders out there. It will show them that you just never know…if a kid from Cassidy can do it, anything is possible!”
– Tianna Smith, Mother.

“Stevie was a pioneer of Canadian gravity racing and a massive inspiration for many of our athletes. He was a proud Canadian and wished the success of all his fellow riders. The goal of the Stevie Smith Legacy Foundation is to help foster success in young cyclists in Canada and around the world. Already, the foundation’s initiatives have supported young riders to represent Canada at an international level. We are really excited for the release of this project with Anthill Films to further share the impact that Stevie is still having.”
– Gabe Fox, Stevie Smith Legacy Foundation Board Member.

“He’s left a legacy of a lifetime. There’s a lot of people out there who strive to be the next Stevie Smith”
– Brook Macdonald.

“He got in people’s hearts, he won fans, and those fans are going to follow him forever.”
– Steve Peat.

“You still see chainsaws on flags at world cups now, and I think you always will.”
– Rob Warner

Anthill Films is a collaborative team of visual storytellers who constantly push physical and technical boundaries to create films that inspire a way of life. Formed out of the groundbreaking crew known as The Collective, for almost 20 years Anthill’s award-winning cinematography has combined stunning, up-close action with an authentic insight into the people, cultures and environments of the cycling world. Over that time, the Anthill crew has produced 12 feature films, three television series and hundreds of shorts, all focused on the power, beauty and athleticism of the bike.

What did you think of the Long Live Chainsaw trailer release from Anthill Films? Are you excited to watch the full film when it drops soon? Stevie “Chainsaw” Smith was such a presence and inspiration to the mountain bike world and is still sorely missed. I would certainly recommend you look into the Stevie Smith Legacy Foundation to see how Stevie’s legacy still lives on and how he’s still making an impact on the Mountain Bike World.

Here is some more content from us at One Track Mind Cycling Magazine and our partners: